A new approach to digital boardgames

So far, we’ve been trying to build a digital boardgame to a budget. The idea being that keeping costs down makes the idea accessible to more people (not everyone can afford to drop a hundred pounds on a hobby project, but lots more people can find twenty or thirty quid for a one-off project).

This is why we were keen to pursue the LC oscillator idea for detecting board game pieces. It’s already been suggested that hall-effect sensors would be a much simpler and more robust solution – simply place a magnet in the base of each playing piece and query each hall sensor on the board to see if it’s been activated.

So far we’d ruled these out because they are relatively expensive. In truth, they’re about 20p each when bought in bulk from somewhere like Farnell. But if you’re building a board game with 390 of them on there, that’s getting on for £80, which is a big amount to find to try out on an idea that a bunch of nerds posted on a website somewhere and which you still need to solder up and make yourself and still not know if it’ll work ’til you’ve made it.

So we thought about this and came up with a different approach: a modular hexagon-based electronic game board. The idea is to make individual modules which can be plugged together to make a pretty-much any-sized gaming board for pretty much any board game. Provided it doesn’t use squares 😉 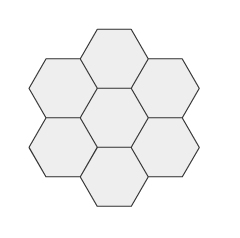 Each module could be a group of seven hexagons. Each module has a hall effect sensor in the centre of each “square”, an 8-bit parallel in/serial out (PISO) shift register, a wired plug and a pin-socket which allows multiple squares to be connected together.

The idea is that the shift registers are “daisy-chained”, with the hall effect pattern copied from the parallel interface (we’re only actually using 7 of the 8 available bits) onto the serial output. As the microcontroller sends a clock signal to the first module in the “chain”, the status of each square in each module is shifted out of the last module in the chain. Send enough clock pulses and the you get a massive binary pattery back, indicating the status of every square on the board. Provided every board is oriented the correct way around, we should be able to work out whether each square on the board has a playing piece immediately above it. 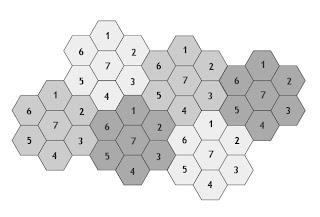 Now each individual module is going to be more expensive to manufacture than an entire board made from cheaper components – but the upside is that the same modules can be used for lots of different board games by simply unplugging them and re-connecting them in a different configuration for a different mcu!

Other than cost, the downside of this approach is that to create a rectangular playing area, there are quite a few unused squares across multiple modules: 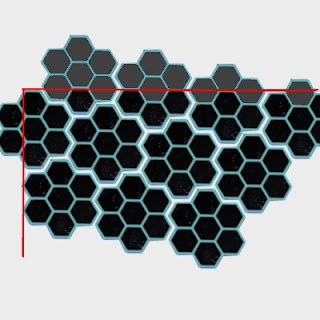 Here’s an example of a rectangular-ish board made up from hexagons – it’s from a BloodBowl-esque game called DreadBall: 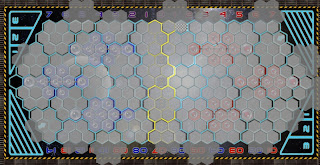 It uses up to 40 hex-based pads (including those with unused squares) which – if we go down the hall-effect sensor route – makes the total construction cost quite expensive. But already that’s something that’s already been queried by a few people…

After all, a brand new copy of Blood Bowl costs about £50 new. And that’s made up of a cardboard playing surface and some plastic miniatures which most players replace almost as soon as they can afford to! If each module costs, say, £2 to make, a full DreadBall sized board would cost about £80. That’s a lot to shell out in one go – but it’s quite affordable (and much more realistic) to make up, say, 10 modules at a time. With only 10 modules, they can still be plugged together and used to confirm that everything works, but without the one-off massive cost of nearly a hundred pounds all in one go.

There’s no guarantee that we’ll ever make enough modules to complete a full-sized Blood Bowl board, but – like the LC oscillator – there’s an idea that needs investigating. So we’ve got a load of components on order from Farnell to try out over the coming few days….