Since I made my first Arduino-powered MIDI arpeggiator a couple of years back I have been meaning (and promising) to get a kit together so others can build their own. Today I listed my first “fundraiser” on Tindie. Hopefully that will raise enough cash get the PCBs made up for 50 of these little beasties!

These ARPIE kits are made up of 2 PCBs which stack up with 25mm standoffs and connect together using a 2×10 way long pin header strip, so there are no ugly wires. The top board is the control surface, packed with 29 tactile switches and 20 LEDs which together provide all the user-interface you get (or need) 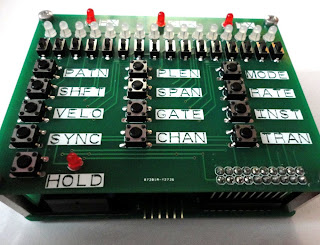 I wanted to preserve the look of my original arpeggiator build, which was in a bright yellow case with black Dymo embossed tape labels. I went for a “Dymo” feel to the PCB silkscreen in this latest build. I made them up in a drawing package and imported them into EAGLE as .bmp files. Although my initial prototype PCBs are standard PCB green, I hope to go for bright yellow soldermask (boards) and black silkscreen (text) in the production run. 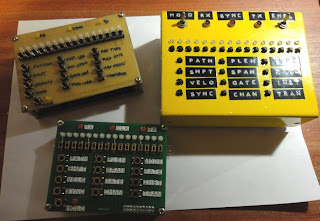 On the back of the control surface PCB are two 74HC595D surface mount shift registers. When I release the kit I will solder these myself, leaving just the easier through-hole stuff to be added. 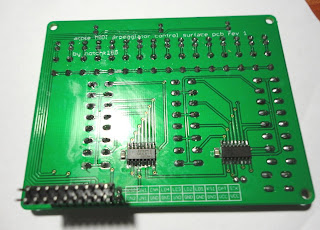 The shift registers are used to scan the switches and drive the LEDs so that only 5 digital I/Os (3 ouputs and 2 inputs) are needed to drive the sixteen blue LEDs and poll the sixteen 6x3mm “Data Entry” tactile switches and the twelve 6x6mm “Menu” tactile switches. The low side of the LEDs is controlled by a 2N3904 transistor. By switching an LED on then off “early” in its refresh cycle we can get multiple brightness levels.. a kind of “poor man’s PWM”. The scan cycle is controlled by a timer interrupt. 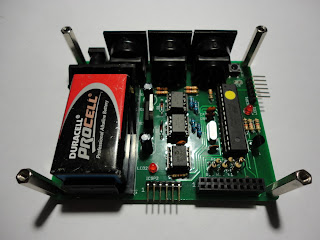 Although there is no actual Arduino board used – this is an Arduino project – with Atmega328 and 16MHz crystal on board. As with most Arduino projects, all the clever stuff happens in the firmware. We send MIDI simply using the Serial port (31250 baud rate). The MIDI spec tells us to optically isolate the serial input to avoid possible grounding issues between equipment so a 6N139 opto-isolator IC sits on the MIDI input.

A feature of the ARPIE is to be able to “slave” to a MIDI SYNCH source which is different to the MIDI input where the notes are being received. For example we might have a keyboard on MIDI IN but want to get our SYNCH from a drum machine.

MIDI SYNCH is achieved through special “tick” messages which arrive at a MIDI input in real time (24 ticks for every beat) so we need a second serial interface to receive these. Since this is rather crucial for timing synchronisation, rather than “soft serial” I decided to add a second microcontroller (PIC12F1822) to manage synch. The PIC listens for the incoming MIDI synch messages and “interrupts” the Atmega328 by pulsing its INT pin each time a tick message comes in. The PIC has its own 6N139 isolator. Apart from the battery and voltage regulator stuff, that is pretty much it for the hardware. 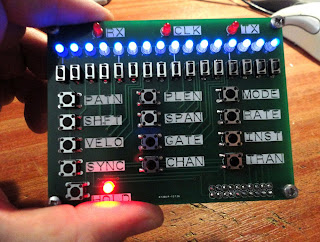 I am quite pleased with the usability of this box – despite the minimality of the user interface it is mostly intuitive once you get used to it (OK so there are some exceptions, like the need to set the tempo in binary coded decimal :o). For most operations you press a menu button, which changes the meaning of the LEDs and data entry buttons for that function. After a period of inactivity it always goes back to “pattern” mode.

Apart from making the Arduino sketch open-source to enable hacking of the firmware, I wanted to make the hardware friendly for customisation (for example to put the device in a proper case or give it a more spacious control surface). To this end the pin header which connects the two boards can easily be replaced with a 20 way IDC socket so you can run a ribbon cable to an customised control surface. Two unused I/O lines are routed through the header for custom use. Case mounted DIN sockets can  be wired in place of the PCB mount DIN sockets supplied. Both micro-controllers have broken out programming headers (FTDI style for the AVR)

Find the Arduino sketch source code, and the hardware design files at
https://github.com/hotchk155/arpie

I am currently running ARPIE as a fundraiser on tindie.com
https://tindie.com/shops/hotchk155/arpie-midi-arpeggiator-kit-1/
Back ARPIE and get your own kit for $59