Just a quick post to remind myself as much as anyone else why Farnell are still number one for me…
After chatting with Robot Steve from BuildBrighton, we were talking about creating peripheral devices for mobile phones. We’ve already made a few USB devices for PCs (USB/HID slave devices) but this was a whole new challenge.

Android have embraced this idea, but in a back-to-front way.
To enable developers to communicate with the widest range of devices already on the market, they’ve suggested creating a USB device as a host (not a slave as would be the normal way of going about things) and then having the phone act as a slave, just as it would as if it were plugged into your PC.

Sounds straightforward enough, but we’ve only ever created USB slave devices, not hosts.
A quick look on the Farnell website reveals that the 24F series of PICs with USB host/slave (OTG – on the go) functionality cost as much as, and sometimes less than, the 18F series of PICs we were using for our slave devices. It looks like it’s finally time to think about moving up to 16-bit micros and leaving our old 8-bit friends behind….

We ordered one of these PIC development boards at teatime yesterday:
http://uk.farnell.com/jsp/search/productdetail.jsp?SKU=1605296

At 8am, a hefty thump-thump-thump on the front door (our postie isn’t afraid to get you out of bed) and it arrived at Nerd Towers: 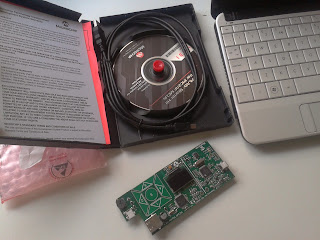 That’s about fourteen hours from deciding to give this stuff a try to it turning up on the doorstep, ready to give it a whirl. Farnell have once again excelled themselves and are proving to be really hacker/maker friendly! We’ve always preferred Farnell over their rivals, because their website makes finding components really, really easy. They’re not always the cheapest, but when the difference between components can be measured in pence, it’s service like this that keeps customers loyal.