It’s been a long, exhausting, but ultimately satisfying day, after running the BuildBrighton guitar stompbox workshop today. There was a sell-out crowd (plus a couple of last-minute attendees, squeezed in on the day) and we had a fantastic success rate – of 12 boxes, 10 were (eventually) working by the end of the workshop! 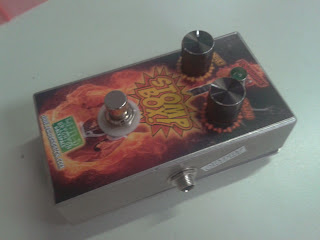 The boxes were based on the Dallas Fuzz Factory schematic, with a couple of tweaks. Firstly, as only two pots were to be exposed on the box (drive and volume) the others used were trimmer pots (compression and gate) so each person could create their own unique sound and capture it inside the box!

As well as making the circuits on stripboard, everyone had a go at drilling their alloy enclosures in the BuildBrighton “dirty workshop” as well as fitting all the hardware and wiring everything up. 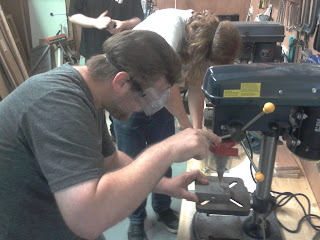 As well as creating a circuit board from the schematics using stripboard (veroboard), everyone had to wire up all the pots, footswitch and sockets and it was amazing to get ten fully-working pedals after about six hours hard work! 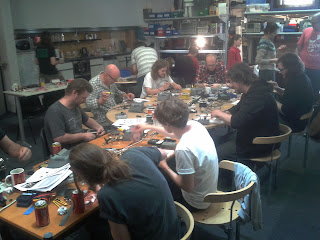 Note how you hear the tone/flavour of the pedal changing as Tom tweaks the compression and gate trimmer pots. These pots allowed us to tailor each pedal without having to swap out lots of different components

Though not everyone was successful on their first attempt. Jon (in this video) actually managed not only to make a crackly pedal, but a direct short across the drive pot terminals in this pedal actually caused it to smoke (shortly after this video ended). When a tiny flame appeared, it was decided to replace his pot and capacitor, just to be sure!

But it was great to see genuine smiles break out – the real ones that you just can’t hide – as more and more pedals fuzzed and buzzed into life
For that authentic rock sound, we were using 2 x germanium transistors in each pedal. Germanium transistors are not as stable nor consistent as silicone ones, so some have a higher gain than others. Real pedal enthusiasts have been known to sit and try out loads of different transistor combinations, to get that “just right” tone. We included sockets for our transistors to all people to do this if they wanted. As time was tight, Jason spent a few hours testing all our germanium transistors and sorting them into (relatively) high and low gain. We used a low gain for Q1 (see schematic) and a high gain for Q2.
Joel, from GAK specifically asked for two high gain transistors to make  really “hot” pedal. You can hear his pedal going crazy when pushed to the top end of the range

Here’s the documentation that everyone was following. Use it to create your own fuzz-factory clone!