Building a board game out of board

We’re stripping back our clever idea for a digital board game and concentrating more on the board element, rather than the digital side of things for a change. Our board is going to have a base of either hardboard or thin mdf. The exact material won’t really matter, because it will all eventually be covered with a cool futuristic-looking glass-and-chrome (ok, acrylic and silver paint) finish.

There are going to be lots of wires around the place, so the first thing is to make some channels in the board. Instinctively we thought of routing the channels out of a thick piece of material, using a cnc router. But instead of a “subtractive” method, it might actually work out easier to build the board up from strips, pre-cut on the laser cutter:

(channels are shown much wider and exaggerated for clarity)

Now imagine we have a board with lots of narrow channels running horizontally, along the longest edge. We still need to mount a surface mount button and an LED under each square. Instead of recessing these, once again we’re going to build up… 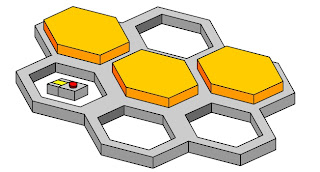 We thinking of using something like black “funky foam” for the hex supports with laser cut acrylic glued on top (just around the edges of course!). Inside each “square” is the surface mount LED and push button. If necessary we can add material to the underside of each hexagon, so that it just touches the button when at rest. This means that the player needs only press the button a tiny amount to trigger an input signal on the microcontroller.

Each hex board “square” is a piece laser cut, clear acrylic. Around the edge of each square, we’ll laser-etch a border. Inside this, we’ll place a cool futuristic-looking sticker to complete the playing square.

The reason for etching the square on the top is so that when the piece is lit from underneath (using one of our smt LEDs) we get a cool glowing-edge effect – based on the principles of “edge lighting” that has become popular in recent years. Although we’re not lighting the edge of the piece, the principles remain the same – the light bounces around inside the acrylic, and appears defracted where the etched part of the plastic allows it to escape, and around the edges. This should give each square that Tron-like edge-glow effect when triggered. And with a human team already called the Tron-Tek 29ers, who can’t resist another Tron-based reference?