After we made a sort-of successful Longworth chuck out of acrylic, we started scouring the internet for alternative chuck designs. The problem with our Longworth chuck is that while it works quite well, there’s no locking mechanism.

A spiral based chuck has natural locking, just due to the friction in the system.
Last night we got busy with the laser cutter, but using MDF instead of acrylic, for the first time. The theory being that if we made a chuck from mdf, there would naturally have more friction against any moving parts, which should help aid the locking action in our chuck.

(MDF is not good stuff for laser cutting. It stinks. And fills the place with smoke!)

We made some jaws with three little pegs on the bottom. These will sit inside the curves of a spiral. 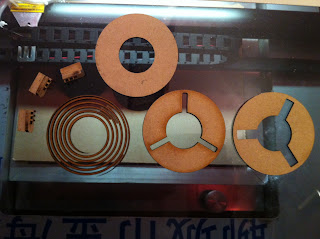 The jaws have little “plates” slotted into them at 90 degrees, which slide inside the larger of the two cutouts 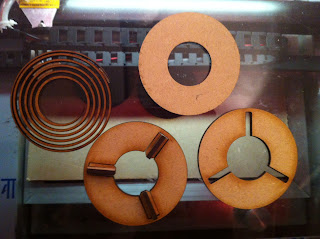 The spiral is mounted onto the plain disc. The jaws also sit on top of the spiral such that the three teeth sit between the curves of the spiral. 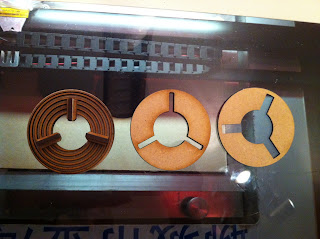 By mounting the slotted pieces over the jaws, we can restrict their movement so that as the spiral turns, the jaws move in and out, along their slots 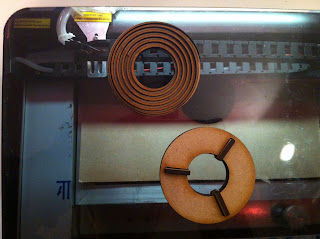 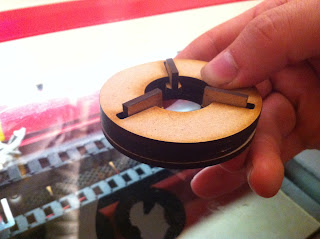 The idea is that the working stock can be inserted into the chuck and pass right through it, the spiral disc on the back is turned, and the jaws slide along their grooves and clamp the work piece to stop it slipping when the chuck is spinning.

So, does it work?
Erm. No.
Not this version anyway.
Maybe MDF is too, erm, grippy. Or maybe the spiral isn’t regular all the way around. Or maybe the design just doesn’t work. The theory should be sound – it’s how commercial chucks are made anyway. But perhaps we’re now seeing why they sell for £30-£40 each and you don’t see many made out of cheap materials for a couple of quid at the local Poundstretcher store!