It’s cold and wet and the nerd cupboard seems such a long way away, and we’ve a pcb here that needs etching. Making up a batch of ferric seems like a bad idea, and storing it in the house could be a pain. What to do?

On one of the instructables pages, someone suggested contact etching using a sponge: http://www.instructables.com/id/Sponge-Ferric-Chloride-Method-Etch-Circuit-Bo/

Apparently it needs only a tiny amount of ferric chloride, so we put about four or five crystals into a ceramic eggcup and added a few drops of hot water. With some hair-dye gloves on, and a bit of sponge, we set to work, rubbing the ferric all over the copper board.

We’ve actually no idea how quickly it etched. The board is a funny orange colour (rather than the usual green we normally use) so it was almost impossible to tell when all the copper between the traces had been removed – it looked the same to us even after ten minutes!

Thankfully, the car paint sticks to the board really really well, so you can afford to even be a little bit rough with the sponge and board – no fear of the mask flaking off like you sometimes get with press-n-peel. After about ten minutes of rubbing the board over, we thought we’d take the mask layer off and see if anything had happened. If not, we’d put contact etching down as a bad job and never try it again!

The end result was very impressive. 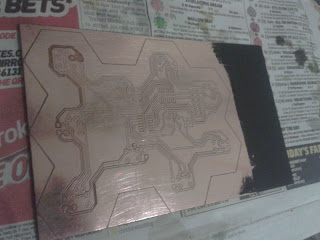 Note how the trace in the top left corner has been completely removed. This is where we put the laser on too high a power and wiped out all but the tiniest, thinnest trace. Perhaps we did over-etch the board with the ferric chloride after all!

Although it’s more than likely that we’d damaged the copper. Before starting the etching, we noticed that in a few places the copper had actually bubbled up from the board, where we’d blasted it with a high-powered laser! 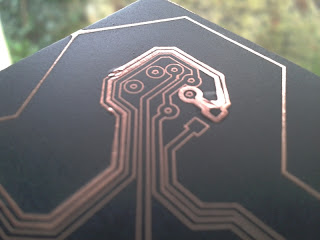 As you can see in the photo above, the actual copper itself is damaged where the power of the laser was too high. So as we’ve etched away the good part, the bad bits have just disintegrated too.

Overall the end result is very good. We’re going to repeat the exercise again using green coloured copper clad board, so we can see exactly how quickly the contact etching process takes. And of course, this time make sure we’re running the laser at the correct power! The only thing of slight concern is that the laser drawn lines are very very fine. There’s still plenty of copper between and around the traces and pads. Whether or not this will affect soldering or make it more difficult, or more likely to bridge, we’ll have to wait an see. First instincts tell us that lots of flux is going to be needed to solder these boards!