It took longer to download and  install the software than it did to get a working example with the FTDI Vinculum II chip this evening! The IDE looks great, the C-style language looks quite nice to work with, and the inline debugging is awesome. Putting breakpoints in code and stepping through, one line at a time is a brilliant way to debug code.

Although it doesn’t really make much sense at the minute, as we’re not too familiar with the language itself, the actual programming environment looks very encouraging.

We’ve been told that the FTDI Vinculum II chip has microcontroller facilities, as well as a hardware-based USB stack (so the device itself takes care of the tricky USB stuff, rather than us having to write our own firmware for USB) and this makes it easier to work with than the PIC 24F counterpart.

Like most things, it’ll probably come down to a matter of personal preference. But so far, the FTDI VNC-II looks quite promising. Let’s see how we get on…. 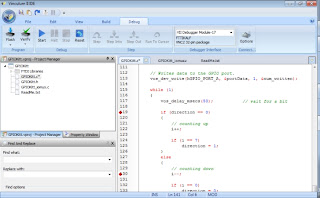