Getting started with iOS iPhone apps and Flash CS6

One of the reasons there’s been little activity (hardware development-wise) at Nerd Towers is we’ve finally joined the cool kids and had a go at making some iPhone/iPad apps. Yes, yes, not before time and all that. But it’s been quite a learning curve!

Not the coding – we’ve been writing stuff in Flash/Actionscript for a while now. But it was time to upgrade from that old work-purchased CS3 so we went crazy and subscribed to Adobe Flash CS6 for 12 months. At just £17/month it’s actually really good value – it’d take about three years to pay back the £600 purchase price at this rate, by which time, there’ll probably be an update on the way! Using the monthly subscription method, you automatically get any updates as they are released. Well done, Adobe!

Anyway, back to this blog post – making our first iPhone app.
Actually, if you’re using a Windows version of CS6, getting it up and running is actually a bit of a faff, but perfectly do-able. All the tutorials on the ‘web tell you to use a Mac if you can (I can’t bring myself to, and other people I know have battled on down the Windows route successfully so I thought I’d give it a go!)

There’s no point repeating here what the Adobe website tells you to do, perfectly well, at http://help.adobe.com/en_US/as3/iphone/WS144092a96ffef7cc-371badff126abc17b1f-7ffe.html but the upshot is that after about an hour of messing about (including going to the shops for milk and coffee) we got a working .p12 certificate. And more importantly, this little screen: 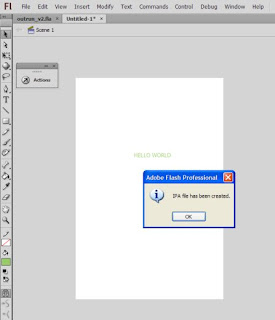 We successfully created our first iPhone app (well, I did anyway!).
Now we’re off to bug Steve about how to actually get it onto the device….