Just one of those nights

Tonight was just one of those nights where nothing seemed to go right.
First off, our “quick-and-dirty” PCB took far longer than we’d hoped, given that it didn’t print properly in the first place.

Then we tried adding a dial of numbers to our petanque score keeping device. NewlyDraw lets you print and “scan” (engrave) from a single file, so we added an engrave layer to our cutouts and set the laser going.
The etching looked lovely as the head whizzed backwards and forwards, but when it came to cutting, things didn’t look quite right: 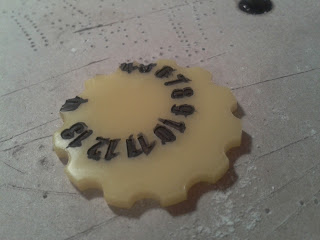 For whatever reason, the etching and the cutting just didn’t line up (yet looked perfect onscreen!)
Undeterred, we decided to try out some paint-filling ideas to make the numbers really stand out. A few CNC forums suggest simply using acrylic paint to fill the engraving, and wipe off with a damp cloth. It didn’t really work for us! 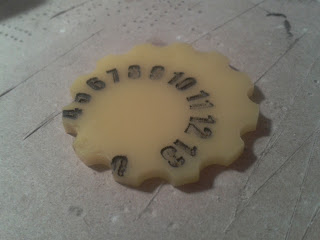 We tried wiping the etching both while the paint was still wet, and after it had dried. The results were noticably different, with wiping once dried giving a better result (but still not brilliant) 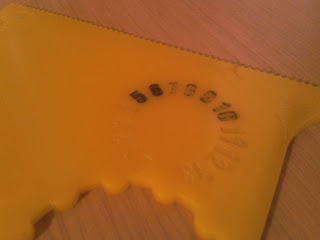 (Numbers 5 and 6 were filled, left to dry, then wiped clean. Then other numbers were wiped while the paint was still wet on the surface)

So neither the etching, cutting nor painting was much of a success.
Our earlier PCB making was only partially successful, but, determined to salvage something from tonight, we soldiered on to make a test board.

We bought some shift registers from Farnell last night (ordered 7pm last night, arrived 2pm this afternoon – amazing service!) for another large LED-based project. The breakout board was supposed to be a quick-and-dirty way of testing out how they worked. So we added some surface mount LEDs to pins 1-6 and mounted a 74HC595 register on the board.

The only trouble was, we can’t find the “pin one” marker on the casing. Normally IC chips have a dot in one top left corner, to indicate which pin is pin one. But this time, we couldn’t see one! 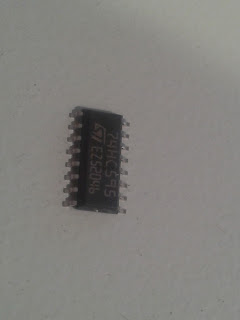 So we’ve just mounted one and hoped for the best.
Now we need to get it hooked up to a microcontroller and see if we can get those LEDs to light up. If they do, we know we’ve got it right. The problem comes if they don’t.
Is it due to a dodgy connection, some badly written PIC code, mis-understanding how the shift register works, or has the IC been mounted the wrong way around?

There’s only one way to find out – but it’s almost midnight now and there’s little time left to go digging about looking for that PIC programmer…..