It feels like it’s taken months (in truth, it probably has) to find a new home for the Nerd Club down in Brighton (well, Hove Actually) and to get the laser cutter back up and running.
But today we made some solid progress. With a PC donated by Chris at BuildBrighton and some cheap extractor fan ducting from Wickes, we finally got our laser cutter up and running in it’s new home.

Of course, the first test cuts should be something simple like a few circles in each corner of an acrylic sheet, testing the laser across the entirety of the cutting bed. We decided against this and went straight into a commissioned piece – some personalised coat hangers for children’s clothing. 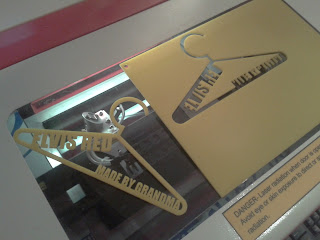 Baby Elvis has some really cool threads to wear, thanks to his grandma. Now he has some cool coat hangers to keep his awesome new shirts in pristine condition (at least until next feeding time!)

We’re just thrilled to see the laser cutter working after such a long time.
Hopefully this will be the first of many jobs to put through it over the coming weeks.