Laser cutting? That’s right! We’re not laser etching here, we’re laser cutting!
We took our PCB design and using Inkscape converted all the strokes into paths. Then, joined all the paths together using the union tool (it took about 45 seconds for the computer to think about that one). Lastly, we swapped the fill (solid black) and the stroke (null) and set the stroke thickness to 0.1mm
The result was a complete outline of our PCB traces: 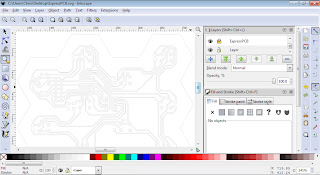 So why cutting and not etching?
We’ve already found out that the fastest speed we can run our laser at is about 50mm/sec. And etching a board up to 100mm high, at a precision of 0.1mm means about a thousand horizontal passes. And the board is over 100mm wide, so that’s more than 2 seconds per pass, so about 2000 seconds to etch. That’s getting on for half an hour to etch a single PCB!

But if we replace etching with cutting, we should be able to get a reasonable “etching” speed from the laser. There’s one way to find out –

We sprayed some acrylic paint onto a copper clad board and left it to dry for about 20 mins before running it through the laser cutter. The result was encouraging (but ultimately not really very satisfactory!) 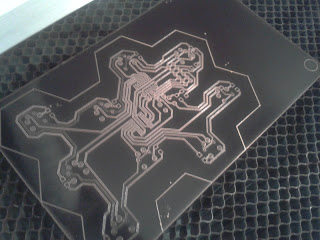 The entire board took just under 3 minutes, cutting at 4mA and 50mm/sec. 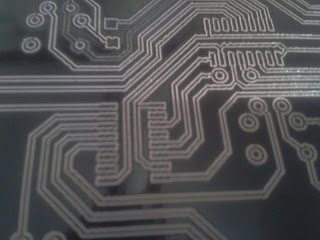 But there’s something not right here – those are some pretty wobbly traces! As we watched the board cutting, sometimes we could see the still-wet paint closing back around an etched line, making some lines fuzzy and indistinct.

Steve suggested Halford’s Matt Black car paint, to be applied in two thin coats (with a few minutes with a hairdryer between coats to help them dry more quickly) rather than one big thick splodgy coat. We did this and tried again 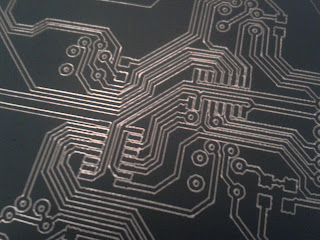 This time the result was quite a bit sharper. But some of the lines (and especially the pads around the SMT resistors) were still a bit wobbly. It seems that running the laser at full tilt introduces a bit of vibration as it’s cutting (the laser does bang about a bit as it twists and turns so quickly around those tiny little pads!)

We tried a third time, running at almost half speed, 30mm/sec. The result was much better and hardly any wobble at all in the pads/traces. This final attempt gave us a board which looked like it would etch and give a pretty good result 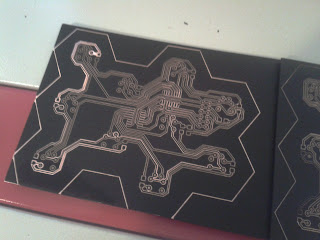 The only thing is, we forgot that when you reduce the cutting speed, you don’t need as much power! The first trace lasered is that big thick etch running along the bottom and left hand edge of the board. It took us a while to realise what was going on, and we had to reduce the power down from about 4mA to 2mA to get a nice clean cut.

A quick wipe of the board after it was finished, with a wet cloth, and the tracks are all nice and shiny and clear of debris, ready for etching. It’s getting rather late here now, so that’ll have to wait until the morning!
Here’s hoping it etches ok (and that we got our cutting depth right and everything still lines up…)