We battled with this one for a while – trying to decide on the best/easiest layout for silkscreen printing. In our previous post, the video shows “traditional” silkscreen printing, with a large screen and plenty of workshop space.

We’re trying for small desktop-sized production, so while the idea of having three layouts on a single screen is very appealing, we’re going to have to produce a single “plate” for each stage in the silkscreen printing process. It’s not as bad as it sounds – and it also means we can easily add in another screen (or two) if we want to do double-sided PCBs.

So the idea is to have a number of small screens which can be fitted to a hinged lightbox, to help with the alignment of the board/acetate before UV exposure. While silk for silkscreen printing can easily be found on eBay, and even fully-made up screens, they all seem rather large for what we’re after. What we need is a small frame that can hold some thin material taught – almost like a homebrew embroidery frame: 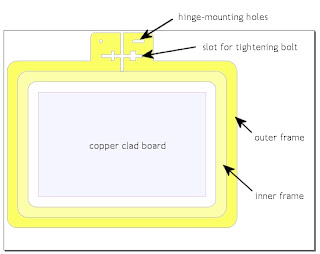 Here’s a laser-cutter-ready 1:1 PDF of the frame:

Open in Inkscape, edit as necessary (perhaps remove the outline for the copper clad board) and save as dxf to make it ready to import into your favourite laser cutting software. While acrylic may seem like a good choice of material for making this frame, laser-MDF might prove more robust as you can expect some flexing of the frame as the silk is stretched – some acrylic sheets can be very brittle and may just crack or shatter during use!