As we haven’t got everything quite to hand to finish off our multi-effect pedal circuit, and with Thursday being the regular BuildBrighton meet-up, we needed something else to work on. And, having access to a full equipped workshop with some really cool tools, it wasn’t time to play about with resistors and microchips – we needed to do something BIG!

As we’re working on some MIDI Arduino shields for an up-and-coming MIDI workshop, it made sense to work on a MIDI instrument. But exactly what?
We’ve already spent some time considering making a midi guitar – where the input from the strings against the frets is converted into a midi signal and fed into a synth. A few years we tried this, taking the audio output from the jack socket on the instrument, and analysing it to try to work out which note(s) were being played.

It turns out that this is very difficult.
To try to simplify things, we looked into making individual string pickups (so each string has it’s own signal to analyse instead of trying to work out which chord is being played across all six strings!). This is exactly how the Roland’s GK-3 “divided pickup” works. The signal from each string is sampled and an output value given to a different channel. The only problem with this approach is that there’s a noticeable delay between plucking the string and the sound being played. It gets worse with lower notes and makes a bass guitar almost unplayable!

So we’re back to using the contact of the strings against the frets as our signal, which removes the need to analyse the audio output. We started by:

Removing the traditional fingerboard from a bass guitar. This was quite easy (once we decided we’d never want to reuse the original fingerboard). Just plenty of heat from a hot gun, and some levering with a couple of screwdrivers. 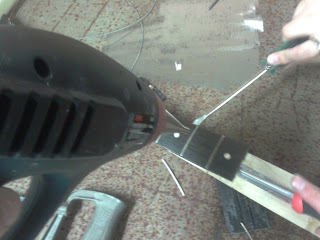 It actually took three of us to do this! The neck was removed from the body and one person held it with one hand while hacking at it with a screwdriver with the other hand. The second person also levered away with a screwdriver, while the third waved the hot gun up and down the neck of the guitar. It took less than 10 minutes to remove the fingerboard! 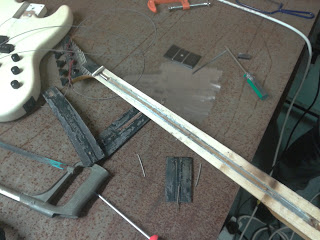 (the scorch marks on the neck will be sanded out when we come to finish the instrument!)


With the fingerboard removed, it was time to design a replacement.
We’re going to be making the replacement fingerboard from copper clad board, cut into sections, with an acrylic fret (3mm) between each one.

We made a cardboard template to try the idea out: 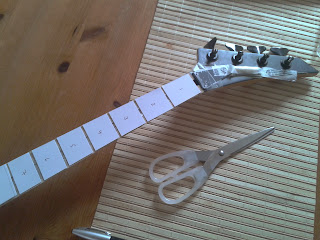 By the time we’d reached the end of the neck, we had 23 frets.
The original bass had only 22 so it looks like our original measurement on the first fret was a little out. However, it’s still within a reasonable distance to recreate the original bass “feel” when playing.
Exact length isn’t critical because we’re never going to be playing the bass “acoustically” – our replacement frets will actually be switches, activated by the string being pressed against them. More details in the following post(s)…..