We’ve had a bit of mixed success at Nerd Towers tonight.
Firstly, we wanted to get our x-axis working on the miniature drilling CNC machine. The y-axis (bed) is easy enough – it’s just a plastic bed set on top of an Ikea drawer runner. The x-axis is altogether more difficult, as it’s a gantry-based axis (to keep the size/footprint down).

In the spirit of making everything as cheaply and as repeatable as possible, we’re using the same rack-and-pinion approach for our x-axis as we have done on the y.
Simply put, a long toothed edge will run along the top of the gantry, and the stepper motor mounted on top of the moving carriage will pull the carriage along by rotating a cog/pulley along the tooth-edged strip.

We’ve decided on this approach as once the parts are designed and proven to work, anyone with access to a laser cutter should be able to make the same thing from our drawings.
The only thing is, we’ve drawn most of the CNC by eye – so have no idea how far away from the rails or toothed edge our carriage is going to be. So the first thought was to make an adjustable carriage: 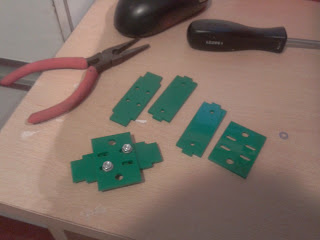 At the bottom of the picture you can see the side section of our carriage. By adjusting the bolts. the stepper motor (mounted on the top of the carriage section) could be moved closer to and further away from the toothed edge running along the top.
After bolting all this together, we found that not one single piece of this carriage had been designed properly so we started the whole thing again, this time with a slightly different approach – “guesstioneering“

It’s a term coined one night at BuildBrighton and fits this approach perfectly.
Basically we make something based on a best guess, then whittle things down until they fit….. 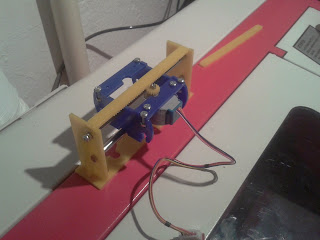 This second carriage (in blue) was designed entirely by eye and with no reference to our frame! (if the frame doesn’t fit, we can always tweak that, and the carriage together, until they line up and mesh together nicely!)
In this instance, the small cog on top of the stepper motor is neither high enough, nor close enough (laterally) to the toothed edge running along the top.
Instead of messing about measuring and re-measuring and cutting and re-cutting, we just decided to make our toothed edge have a bit more play in it. The idea being that we line it up with the carriage in place and just fix it down!

As we were cutting a new toothed section, we decided to go for a double-sided piece, with the cog on the stepper motor sitting between two rails. Hopefully, this will stop the motor from pushing away from the toothed edge and skipping steps…. 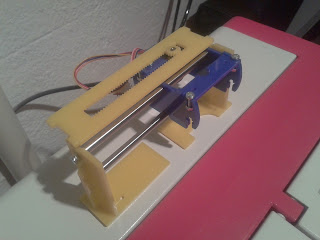 The only thing now, of course, is that we need to make our gantry stands about 3mm higher and a little wider on one side (so they’re asymmetrical) so that this new piece doesn’t look like it’s been cobbled together and just shoved on as an afterthought. (it has, but there’s no need to advertise the fact!) 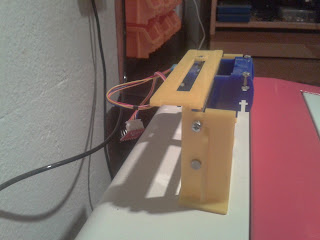 This new carriage moves along the rails quite nicely.
There’s not much play and hopefully this double-rail approach will eliminate this altogether. Here’s a quick photo to show the actual size of the gantry. It’s really quite small – 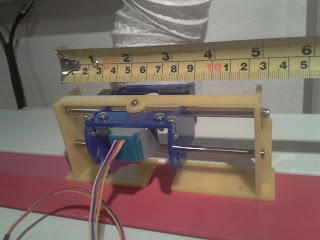 So there we have it. A nice sliding gantry with a stepper motor mounted onto it. It’s not quite working under it’s own steam just yet, but we can’t help but feel that we’re getting a little bit closer!
Here’s how the final thing will sort-of look in place over the y-axis bed. We may even go crazy and lose the lump of scrap wood for a nice piece of red acrylic. That’s the kind of colour scheme that would make Robot Steve have a fit 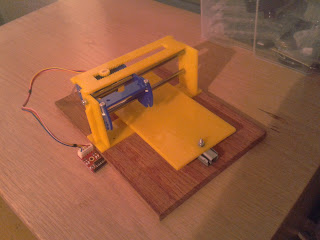