Resistor ladder for digital board game

Having decided to scrap making modules and a pcb-based board game, at one of the open nights at BuildBrighton we managed to put together a simple test piece for our game. It’s still a 7-hex module whereas the final board will be 12 by 24 or something, but we’re just trying out the idea of “dead-bugging” our design – soldering the parts together with bits of wire rather than mounting onto a PCB.
The result was….. interesting: 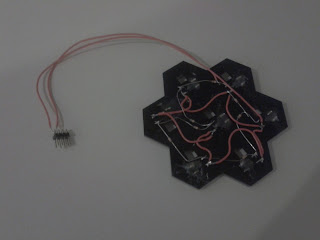 The buttons were held in place with hot glue. That in itself makes putting this thing together quite tricky – and there are only 7 playing squares here – the final board will have nearly 400!
Dabbing the wires onto the buttons was easy enough, but sometimes, when adding a wire and a resistor, one would pop off while the solder was still hot. Very frustrating! Because of the hot glue, only one of each pair of terminals was available to solder to. 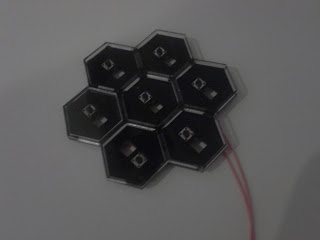 From the front you’d never know what a mess it was at the back. But gluing the buttons and routing all the wires is a bit fiddly. It’s almost like we could do with some kind of board that we could mount the buttons onto, to hold them in place, and then perhaps run the wires on the underside, rather than the same side as the buttons….

Almost like some kind of PCB, but with the buttons on one side and everything else on the other….in fact, a pcb with through hole buttons, rather than surface mount ones would be just the thing! (is this starting to sound familiar?)