Our laser-cut pcbs were certainly quicker to make than using laser-etching (we converted the pcb image to vector and cut out from around the traces rather than using the laser to etch a rasterized bitmap image) and the ferric chloride made a great job of etching them.

But because the mask had been laser cut, the etched part of the board is very very narrow.
And this has made soldering rather difficult. The tiniest little movement of either iron or solder means it’s really easy to create bridges across the tracks – even when using tons of flux 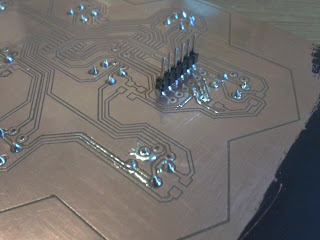 We made a right mess of soldering the pin-header connector too – ripping the traces from the pcb when removing the IDE ribbon cable we’d squashed on top of it. So it looks like we’re going to need to re-think the pin header idea – and find a way of solder-masking the rest of the PCB to stop the iron from bridging the traces when too much solder is applied!