Last monday, BuildBrighton (my local hackspace) along with Playgroup (Brighton arts and events collective), ran “Noise Toys”… a day of making noisy gadgets in a local pub, anyone welcome – as part of the Brighton festival fringe.

At BB we were intending to provide a selection of “sound sculptures” around the place, but in the end we only managed a couple, which included my Lava-Lamp modulated synthesiser and an “interactive solenoid percussion” thing, which I’ll give you the low-down on here

My idea was to have some MIDI triggered solenoid percussion (similar to http://hotchk155.blogspot.com/2010/10/solenoid-drum-machine.html) together with some kind of control surface to allow passing punters to control the solenoids and make little tunes and rhythms.

I thought it would be fun to use my Novation Launchpad to control the solenoids.

The Launchpad is a grid of illuminated buttons that is intended as a controller for Ableton Live (music app), but like most things it can be hacked 🙂

A while back I made a little Windows-based program to run a “rain storm” sequencer on the Launchpad (as seen on http://www.youtube.com/watch?v=ZgMDTJce9D8). Basically this was a simple step sequencer where notes are triggered by pressing buttons on the Launchpad and they “fall” – only sounding when they hit the bottom of grid. Pressing buttons on the lower row toggles them between Green (notes in the column are played then cycled back to top of grid) and Red (note plays once and does not cycle)

To add to the challenge (and because I needed the laptop to run Reason for the Lava Lamps) I thought it would be nice to be able to run the rain storm sequencer without the computer….

The Launchpad is a USB device (it doesn’t have 5-pin MIDI connectors) so something would be needed to work as a “USB host” to allow a program running on a microcontroller (Arduino, PIC etc) to listen out for button presses and to control the Launchpad lights while sending out MIDI notes to trigger the solenoids.

I’d thought about making my Launchpad into a standalone MIDI controller before, and I had been looking at the FTDI VNC2 USB host chip (more about that later) but first of all I decided to try out the Sure Electronics USB HID Host Module which is based around a PIC and is a little short of £10 on eBay including the postage.

Sure’s board is a nice little module, with 0.1” headers for the PICKit programmer and for serial comms with other application hardware. It also has a USB Type-A (host) socket and couple of addressable LED’s. The on-board PIC24FJ256GB110 supports “USB On the go” (OTG) which means it can act as a USB host. Sure’s web-site has downloadable source code for a firmware app, based Microchip’s own open-source USB host stack, that will host a standard USB mouse or keyboard. 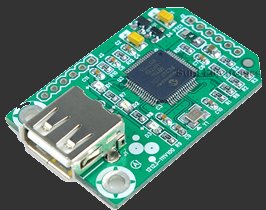 The only disappointment here is that only a minimal set of I/Os from the PIC are bought out through the headers which limits applications of the board since most of the PICs I/Os are inaccessible. Still, its a nice handy board and reasonably priced. But will it work with the Launchpad?

The Launchpad is not a standard USB MIDI or HID device. Rather it has a custom interface using two interrupt endpoints. This can be accommodated on the PIC with a couple of mods to the “Generic” device driver code from Microchips stack. It was my first time working with USB hosting and with 16-bit PICs so it was a learning experience.

When used under Windows via the Novation drivers, the Launchpad shows up as a MIDI device and is controlled by sending it MIDI note and controller info to toggle the LEDs. When Launchpad’s buttons are pressed, it spits out MIDI notes/controllers which an application can act on.

So that the MIDI interface from Windows but exactly is happening on the USB wire? Well, a quick bit of trace code on the PIC showed that exactly the same MIDI bytes are being passed between the USB endpoints, making it nice and easy to drive the Launchpad from an embedded USB host like the PIC. Thankyou, Novation!

So on to the Rainstorm sequencer program, which I wanted to run on the same PIC. The sequencer code itself is pretty simple, but there are some complications when using Microchip’s USB host stack which meant it took a while to get it working….

The main gotcha for me was that USB I/O operations need to be first initiated then polled for completion (or they can send completion events). However, to keep the stack ticking, the app must poll it via a “USBTasks” function. Without this polling, the stack does nothing and I/O will not complete. Ok, so just call USBTasks all over the place right? No sireeee, not if you don’t want to end up in a confusing re-entrant mess and watch the PIC collapse in a heap.

In fact you need to be careful not to make USBTasks call anywhere but the top level loop, and to make sure that the application attempts just one USB I/O operation between USBTasks calls. One result of this is that long sequences of USB I/Os can become painfully slow to complete. With the Rainstorm sequencer I found that it became very sluggish at responding to input when there were more than a couple of dozen notes in play.

I am looking forward to trying this on the FTDI VNC2 chip which has the USB stack and application running in separate threads and should be able to get much better throughput.

OK – back to the fun and games! So the UART from the PIC is broken out to the header on the Sure Electronics board, and with the code changed to set up the correct MIDI baud rate and remove all other UART debug output from the code I could just stick on a 5-pin DIN socket via a couple of 220R resistors and I was sending MIDI.

On the other end of the MIDI connection I had a breadboard with a PIC16F688 receiving MIDI through a 6N138 isolator and triggering 8 digital outputs (each mapped to a MIDI note from the sequencer). Each output goes through a 1K resistor to a TIP120 NPN power transistor which directly drives a solenoid. The solenoids need about 18 volts to work properly so there’s a 7805 and smoothing caps between the 18V side and the 5V logic side. I also had a hefty cap (2200uF) smoothing the 18V side since the solenoids can cause some big voltage dips when they fire all at once and this can reset the PIC. The schematic is available here

Once all the electronics was working it was time for the art… and unfortunately I didn’t leave myself much time for that bit. I ended up gathering up milk bottles and hammering together a wooden frame for them to sit on, all the night before the gig. I had for some reason assumed that milk bottles, tuned with water, would make a pleasing “xylophone” effect… I hadn’t really anticipated the the terrifying wall of machine gun clinking that they actually threw out.

Hmmm, well, there is always next time 🙂