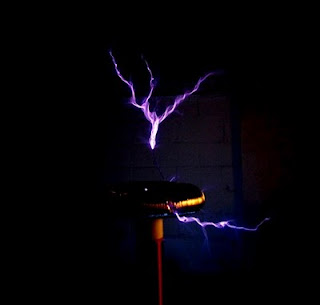 I’ve been playing on and off with the coil for the last couple of months, but the first test a few weeks ago was a little bit disappointing, only managing sparks of 6″ or so and then only to ground (no air streamer breakout event with a breakout point﻿ on the top)
At first I thought the problem was positioning of the primary coil tap (i.e. change the number of active turns on the bottom coil) but I still could not get any better than 6″ sparks to ground. Then I started to play with the spark gap and found that using a spacer to force a larger gap between the lengths of copper tube making up my static gap, the sparks improved a bit. That is until the spacers caught fire 🙂
So, I decided to try with a simple rotary spark gap and holy crap did it make a difference! Here it is… 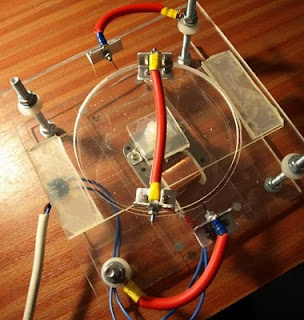 I used 5mm acrylic sheet as a base material and a nominal 3000rpm shaded pole motor running at 240VAC. In theory 3000rpm is 50 revs per second. With the spark gap opening twice per rev (i.e. presenting at zero and 180 degrees) this should give 100 breaks a second I think… in theory this is perfect for discharging the capacitor bank just as it reaches maximum charge twice (positive and negative) on each mains AC 50Hz cycle.
Thats the theory, but its not a proper synchronous motor and the load of the spinning gaps looks likely slow it down a bit… if I get on to tuning things further I might try to work out its actual RPM. The motor is fitted to a base plate which can be rotated so the phase (i.e. when in mains cycle the breaks happen) can be changed, but I think this is really only going to be of value if the break rate really is 100Hz. I haven’t played with moving the motor yet, something for another day.
Well… here are the results, without any serious attempt at tuning the primary tap.
Some other recent additions are a Terry Filter (safety spark gap and surge filter which protects the Neon Sign Transformer getting fried) 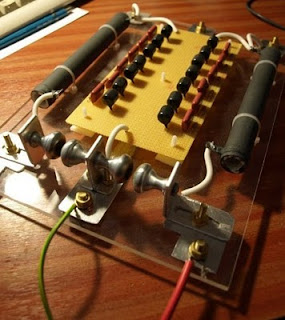 And a wooden base for it all to sit on 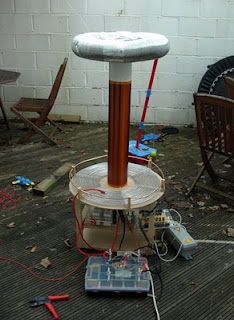 When I was packing it all up I was rather perturbed to receive small electric shocks every time I touched the secondary connections. At first I thought I had done something dumb like leave the mains connected or that the primary capacitors had remained charged somehow. However I got shocks handling the secondary even after I had completely removed it from the rest of the setup and I think the PVC pipe and/or the varnish layer were storing a static charge which leaked slowly over to the copper wire. The outside of the varnish certainly had a static charge like a TV screen right after the coil had been run. Interesting!